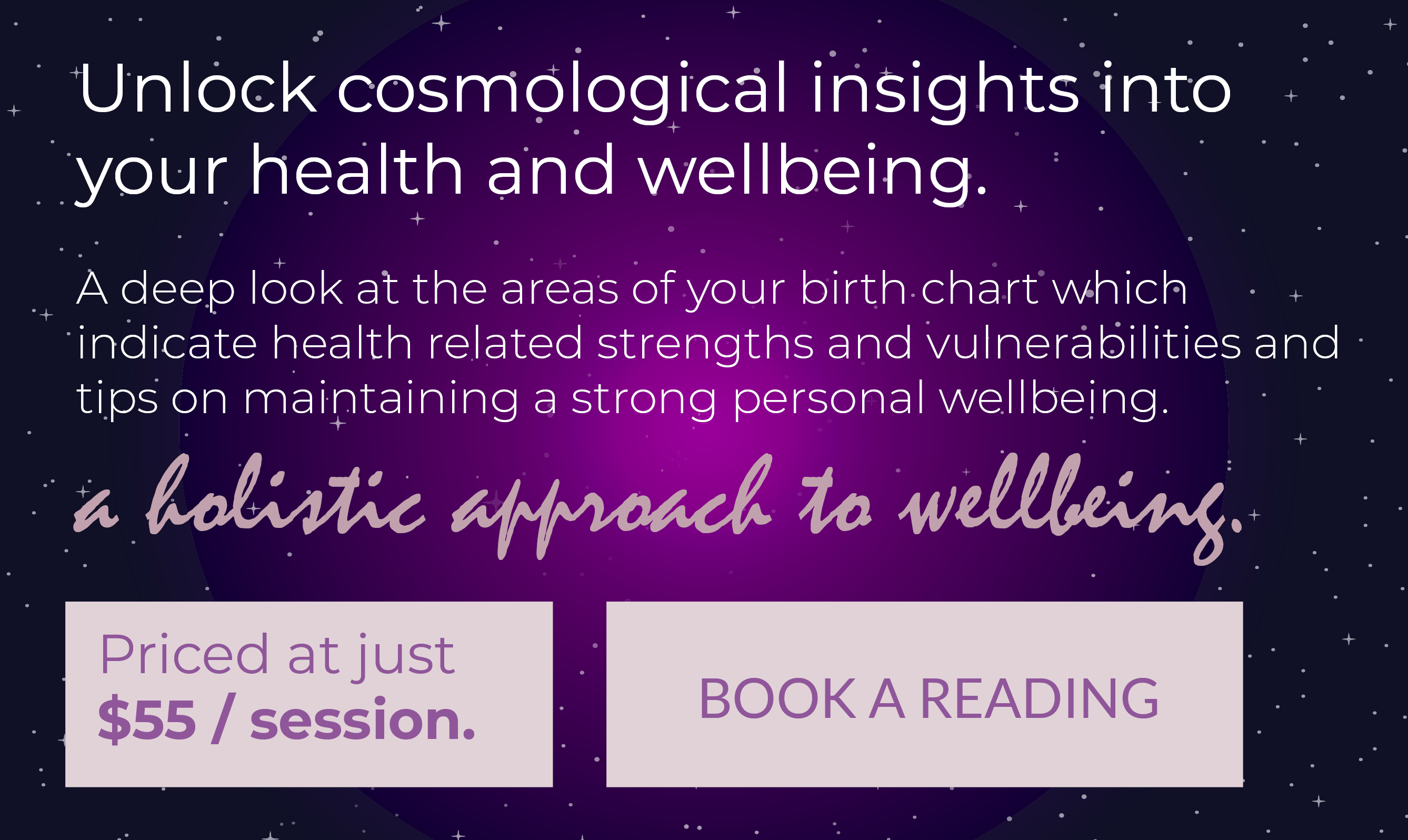 We have calcium in our bones, iron in our veins, carbon in our souls, and nitrogen in our brains. 93 percent stardust, with souls made of flames, we are all just stars that have people names.”
– NIKITA GILL

Medical Astrology for Wellbeing – Since time immemorial humans have looked with awe and wonder at the sky and have felt the influences of the planets upon our lives. Our ancestors got up and went to sleep with the sun. They noted that plants react and grow at different paces in accordance with the phases of the moon. They respected and often worshipped these luminaries. As the centuries went by and homo sapiens became more and more advanced they observed more planets in the sky and connected the energies of the stars that they would see with life on earth.

Humanity has always looked for patterns in our search for purpose and meaning and astrology is one of the most ancient and symbolically rich systems that is available to us.

Astrology works because it acknowledges that everything in the universe is connected, which by the way is what physicists are talking about when discussing ‘string theory’!

We are made up of the same basic particles that astronauts and space travelling robots discover on distant planets. Of course these huge bodies in the sky have an influence on us.

Understanding your natal chart (the blueprint for your life based on where the planets were when you were born) will give you insights into why you behave, react, feel and look the way you do. When we understand the big ‘whys’ of how we are we can take appropriate steps to alleviate extremes and to place ourselves in situations that help us to grow rather than stagnate and crumble.

Looking at the transits of the planets into and out of relationship with your natal chart can shed light on the best ways to approach particular periods of time or when it is most beneficial to undertake particular activities such as travel, job interviews, romantic pursuits.

We can also use astrology to give us lots of information about health and wellbeing, this is called “Medical Astrology” and has been used as far back as Babylonian times. Medical astrology helps you to understand which aspects of your physical and mental health you need to take particular care of. When you have a wellbeing issue, medical astrology can give you an understanding of why, how long the condition is likely to be a problem and also what you can do to overcome the condition, using specific foods, herbs, Bach Flower remedies and lifestyle approaches.

In my work I use Sidereal Astrology. The word sidereal means “of, or calculated by, the stars”. Sounds pretty obvious when we’re talking about astrology doesn’t it?! This is the way that our ancient ancestors first began to practice astronomy and astrology – by looking at the stars, the planets, the constellations themselves.

So how is this different to the standard practice of astrology that most people are used to? Well around 2000 years ago the stars matched the seasons and at the Equinox in March (Spring in the northern hemisphere) the Sun moved into the constellation of Aries. Tropical Western (aka ‘common or garden’) astrology has continued to view the astrological calendar in this way, ie. the March Equinox (21st/22nd March) is fixed as the beginning of Aries season and everything else follows from that.

However, in the 2nd century BC, a Greek astronomer called Hipparchus, discovered that there is a tiny but gradual shift in the orientation of the Earth’s axis of rotation, called precession. What this means is that over thousands of years the view of the stars from the Earth has shifted so that at the March Equinox the Sun actually now still rises in the constellation of Pisces, and doesn’t move into Aries for another month or so. The precession shift happens at a rate of about 1 degree every 72 years.

To me it makes much more sense to take the science of astrology from where the stars are actually placed, rather than where they were placed 2000 years ago. Once I had my own birth chart in the sidereal system it certainly rang very true for me! The system of sidereal astrology that I have been taught also takes the constellations at their actual sizes so it does not simply divide up the zodiac into 12 equal portions – it really can’t, because that is not how the constellations are – they are all different sizes. Excitingly my system also incorporates the 13th constellation of Ophiuchus, which was originally included in astrology in ancient times but has been left out for hundreds of years now. Ophiuchus should be included because it sits in the zodiac belt along with the other 12 constellations. Importantly though, what doesn’t change between Sidereal and Tropical Western astrology is the meanings, symbolism and psychology of the signs, planets and houses.

You would! You know it’s true!

But seriously, anyone who wants to understand themselves better, to understand what their drivers are, why they have the relationships they do, which areas of life they are going to be most successful in, and most importantly what they can do to bring about more BALANCE.

If you want to understand the best ways to look after yourself physically, mentally and spiritually then a medical astrology reading would be very a wonderful start down the road to a depth of wellbeing that you have not experienced before.

If you’ve got some big decisions coming up then a look at what planets are transiting your natal chart will give you some wonderful guidance to help you make the best possible choices for you.

What does a session entail?

Sessions are conducted on Zoom and will be recorded so that you can refer back to your reading as often as you like. (NB if you are local to my studio you are welcome to come in person if that is your preference). You will also be provided with some written notes. Allow 60 minutes for your session.

For a limited time only, sessions are

WHAT MY CLIENTS SAY

“I can definitely recommend Arwen and Evenstar Wellbeing. I recently had an online medical astrology session – I wasn’t really sure what to expect beforehand, but I really enjoyed the session. It was informative, I came away with actual insights and ideas of things I can action straight away to improve my wellbeing, and it was also really fun! I’m thinking that this session would also make a great gift for anyone who is a little bit interested in astrology and/or improving their wellbeing. Or, for those of us in and out of lockdown, book in for your own session – it’s an affordable, interesting and beneficial way to pass the time! You won’t regret it.”

“Arwen gave me excellent insight into my astrological chart and health issues. It was so helpful for me to have this confirmation! I highly recommend anyone seeking help with their health and healing to have Arwen give her perspective! ”

“Thank you so much for doing my chart and talking me through it. It’s most insightful – quite a few things for me to work on.”

“Arwen, Thank you very much for my reading it was fantastic!”

“Very satisfied with the session and will recommend to a friend (5out of 5). Very insightful, lots of practical information, a very enjoyable session.”

WANT TO BE INSPIRED, MOTIVATED AND HEALED?